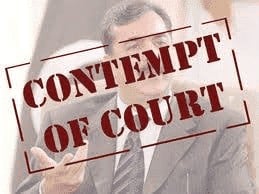 What is Contempt of Court & when does it occur

Very rarely but occasionally, a Court may find the breaches of Court Orders are so very serious, flagrant and deliberate that they constitute Contempt of Court.

It may be contempt of court if the conduct in breach of a Court Order is so serious that it involves a flagrant challenge to the Court’s authority or a serious disreguard of the party’s obligations under an Order.

A Court does not take this decision upon itself.  A party alleging the the parties breaches of Court Orders are so serious as to amount to contempt for the court, rather than simply a contravention of the Court Order, must make a specific application to the Court about the issue.

The Law about Contempt of Court

“(1) Subject to subsection (1A), this section applies to a contempt of a court that:

(a) does not constitute a contravention of an order under this Act; or

(b) constitutes a contravention of an order under this Act and involves a flagrant challenge to the authority of the court.

(1A) This section does not apply to a contempt that constitutes a contravention of a maintenance order if the order has been complied with before the matter of the contravention comes before the court.

(2) In spite of any other law, a court having jurisdiction under this Act may punish a person for contempt of that court.

(3) The applicable Rules of Court may provide for practice and procedure as to charging with contempt and the hearing of the charge.

(4) Where a natural person is in contempt, the court may punish the contempt by committal to prison or fine or both.

(5) Where a corporation is in contempt, the court may punish the contempt by sequestration or fine or both.

(b) suspension of punishment; or

(c) the giving of security for good behaviour.”

“(1) If it is alleged that a person has committed a contempt of the Court (other than contempt in the face or hearing of the Court), an application may be made to the Court for the person to be dealt with for the contempt.

(a) be in accordance with the approved form; and

(b) state the contempt alleged; and

(c) be supported by an affidavit setting out the facts relied on.

(3) An application may be made:

(a) if the contempt is in connection with a proceeding, by a party in the proceeding

(6) When the person attends before the Court, the Court must:

(a) tell the person of the allegation; and

(b) ask the person to state whether he or she admits or denies the allegation; and

(c) hear any evidence in support of the allegation.

(7) After hearing evidence in support of the allegation, the Court may:

(a) if the Court decides there is no prima facie case, dismiss the application; or

(b) if the Court decides there is a prima facie case:

(i) invite the person to state his or her defence to the allegation; and

(ii) after hearing any defence, determine the charge.

(8) If the Court finds the charge proved, the Court may make an order for the punishment of the person.”

Court Decisions about Contempt of Court

“The use of the term “flagrant challenge” to the authority of the Court is intended to underline the exceptional or striking nature of the contravention in question and thus to differentiate it from what might be described as the general run of breaches which are intended to be dealt with under s.112AD.”

Standard of Proof for Contempt of Court

The standard of proof on all charges of contempt is that the charge must be proved ‘beyond reasonable doubt’.

What does proving contempt ‘beyond reasonable doubt’ in a civil matter such as a family law matter (as opposed to a criminal matter) mean?

“The differences upon which the distinction between civil and criminal contempt is based are, in significant respects, illusory. They certainly do not justify the allocation of different standards of proof for civil and criminal contempt. Rather, the illusory nature of those differences and the fact that the usual outcome of successful proceedings is punishment, no matter whether primarily for the vindication of judicial authority or primarily for the purpose of coercing obedience in the interest of the individual, make it clear as Deane J said in Hinch, that all proceedings for contempt “must realistically be seen as criminal in nature”. The consequence is that all charges of contempt must be proved beyond reasonable doubt.”

Recent Court decisions about Contempt of Court are posted on our website blog from time to time.

Punishment for Contempt of Court

If the Court finds a party to be in Contempt of Court, then the Court may make an order that:

If are not actively seeking that the other party be punished for the breach or breaches, but rather, just want a speedy remedy to ensure the resumption of the arrangements set out in an earlier order, you may be able to file an Application in a Case rather than an Application – Contempt.

Other Pages in the How to Represent Yourself Section